Read and listen to the following dialogue after studying the new vocabulary. 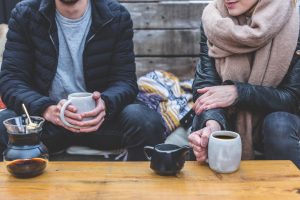 In Arabic culture, some kinship terms can be used as address forms for non-relatives like parents’ friends or acquaintances who are elder in age. The following expressions are from Egyptian Arabic address forms:

Visiting and hosting in Arabic culture

As you notice in the dialogue, there was a brief back and forth interchange between the host and guest regarding offering a drink. The guest politely refused a couple of times before accepting to drink tea. This can be termed as pseudo refusal which is done socially among people on a daily basis. It is not only confined to guest/host scenario but could occur in other situations that involve offers like giving a ride or taking leave. Pseudo refusal can be highly recommended with elders or people in higher position. It becomes less likely to happen between very close friends.

Activity (19): Choose the appropriate expression you can use in each of the following situations.

Watch the song تشرب إيه. What do you think is the deep meaning behind it?

Elementary Arabic by Ayman Mohamed and Sadam Issa is licensed under a Creative Commons Attribution 4.0 International License, except where otherwise noted.