Get started with letter shapes. Study the following chart to identify letter forms. 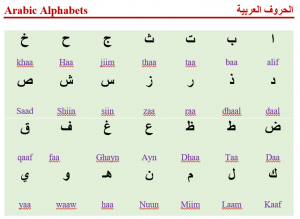 In this video, you will see how letters change shape in initial, middle, and final position of words. This is an overview to get prepared for the writing training and connecting letters practice that we will conduct in the following chapters.

Short vowels (a-i-u) are represented in Arabic as diacritics above or below the letters. These marks are not necessarily written, as native speakers can read without having these short vowels. You will also be trained to implicitly recognize them. Watch this video to see how these vowels look.

Long vowels (aa- ii- uu) are represented through actual letters. The three letters you will always need to write a long vowel are:

Elementary Arabic I by Sadam Issa and Ayman Mohamed is licensed under a Creative Commons Attribution 4.0 International License, except where otherwise noted.