The neuron is composed of a number of specialized structures that are critical for proper functioning. Dendrites branch out from the cell body or soma like a tree. The word dendrite comes from the word for tree in Greek. The dendrites are the primary input zone for the cell and receive information from other cells. The number of inputs a neuron receives depends on the complexity of the dendritic branching. The soma houses the nucleus and most organelles and is the location of gene transcription, protein synthesis, vesicle packaging, and other cellular machinery mechanisms. The axon hillock is located at the transition of the soma and axon. It is the location where action potential propagation begins. The axon transmits electrical signals, called action potentials, from the cell body to the presynaptic terminal. Some axons are covered by myelin sheath, which is an insulating material that allows the action potential to travel down the axon faster. Between the myelin segments are the Nodes of Ranvier where the axonal cell membrane is open to the extracellular space. Ions can flow across the membrane at the Nodes, which allows for regeneration of the action potential. Finally, the presynaptic terminal is the output zone. After the action potential reaches the terminal, neurotransmitters are released into the synapse to send messages onto the next cell. 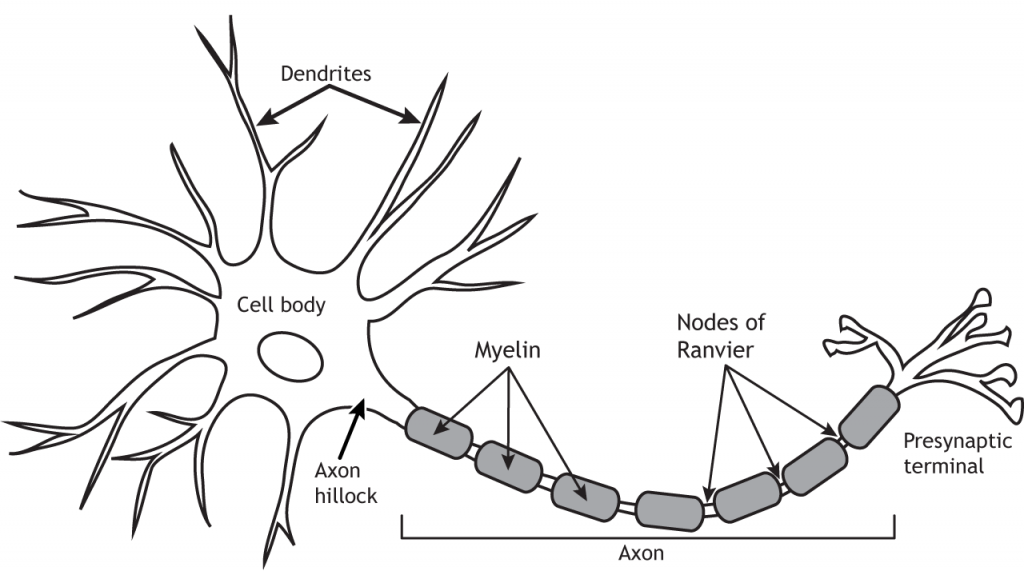 When an ion is at equilibrium, there will be no net ion flow in either direction. The ions will still move however, there will simply be an equal number of ions moving into the cell than are moving out.

The membrane potential is the difference in charge inside the cell relative to the outside, so it takes into account permeability and concentration of all charged molecules when the cell is at rest. It is calculated by the Goldman equation. Equilibrium potential is the membrane potential at which one specific ion is at equilibrium, meaning there is no net movement of that ion in either direction. A cell would reach the equilibrium potential of an ion if the membrane were permeable to only that ion. It is calculated by the Nernst equation.

The absolute refractory period occurs when the voltage-gated sodium channels are either open during the rising phase or inactivated during the falling phase.

The cell cannot fire a second action potential during the absolute refractory period. The voltage-gated sodium channels cannot reopen in response to a stimulus, regardless of the strength.

The cell can fire a second action potential during the relative refractory period, but the strength of the stimulus must be stronger than when the cell is at rest since the membrane potential is hyperpolarized. The cell will require more stimulus to reach threshold.

In this voltage-clamp experiment, the neuron is clamped at a membrane potential of 0 mV starting a the 1 msec time point. This depolarization is past threshold, so the voltage-gated sodium channels open transiently, increasing sodium permeability and allowing sodium ions to rush into the cell, shown by the inward ion flow on the graph. Briefly after opening, the voltage-gated sodium channels inactivate, preventing any further inward current. The delayed-rectifier voltage-gated potassium channels then open, increasing potassium permeability and allowing potassium ions to rush out of the cell, shown by the outward ion flow on the graph.

The postsynaptic cell would show an EPSP

The postsynaptic cell would show an IPSP

With this repetitive firing comes a summation of individual EPSPs, which leads to an increase in depolarization. Once the depolarization reaches threshold, the cell will fire an action potential, but the recording electrode in this example is located in the cell body, not the axon, so action potentials will not be measured.

Neurotransmitters can activate both ionotropic and metabotropic receptors.

Ionotropic receptors are themselves an ion channel, allowing direct ion flow after neurotransmitter binding. Action is immediate and rapid.

Rods and cones play specialized roles in the perception of sight.

Location: Rods are almost completely excluded from fovea, but the fovea is the location of the majority of cones.

Convergence: Rods have high convergence on bipolar cells; cones have low convergence and can have a 1 to 1 pairing of photoreceptor to bipolar

The fovea is the region of greatest vision acuity. It consists mainly of cone photoreceptors.

The optic disc is the region where the ganglion cell axons leave the retina as the optic nerve. It is responsible for our blindspot because of the absence of photoreceptors in the region.

The primary somatosensory cortex is located in the postcentral gyrus – named because it is the gyrus just posterior to the central sulcus.

Neurons traveling from brainstem will synapse in the ventral posterior nucleus of the thalamus before traveling to the primary somatosensory cortex.

Foundations of Neuroscience by Casey Henley is licensed under a Creative Commons Attribution-NonCommercial-ShareAlike 4.0 International License, except where otherwise noted.